Self isolation retreat at Dharamsala for duration of pandemic lockdown 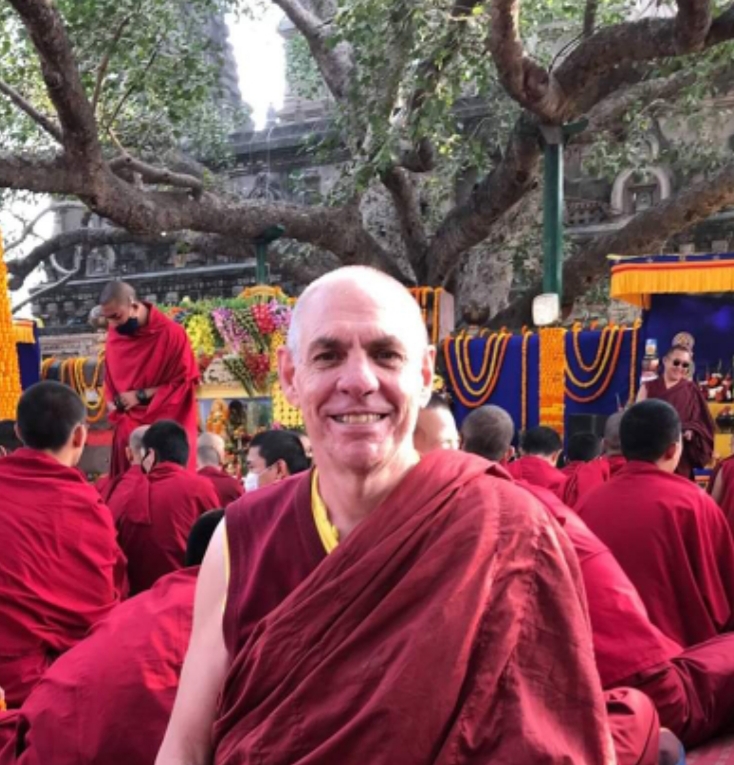 In my last petition I submitted this statement regarding my practice. Much of this has now been postponed due to the pandemic. For details of my present circumstances see ABOUT section

The first Buddhist teacher I met was Dzongsar Khyentse Rinpoche (DKR) in 1986, after which I immediately went to live at Wat Buddha Dhamma Forest Monastery and studied intensively for five years in the Theravadan tradition with Phra Khantipalo.

When HH 41st Sakya Trizin visited Australia in 1997 (along with the current HH 42nd Ratna Vajra Rinpoche) I had found my root guru(s). A meditation hut became available at the retreat centre of DKR called Vajradhara Gonpa and so I began what I believe was the first three year retreat conducted in Australia.

At the conclusion of the retreat I was advised by DKR to ordain as a Theravadan monk “for ten days”. I did this at Bodh Gaya with the assistance of the abbot and monks of Wat Pa Bodh Gaya in Jan 2001. This was enough to convince me to ordain as a monk in a Tibetan tradition. So six weeks later I ordained again as a novice monk, this time with HH Dalai Lama at Dharamsala receiving the name Tenzin Lektsok.

HH 41st Sakya Trizin advised me soon after this to return to Australia to help support the Sakya community in Sydney, which I did between 2002 and 2016. In that time I assisted Khenpo Damchoe and later Dungyud Tulku Rinpoche.

I have received many empowerments such as Kalachakra (4 times) Hevajra/Lam Dre (5 times), Vajrayogini ten day teaching (4 times), Complete cycle of Red Tara teachings of Apong Terton and all the principal Sakya empowerments.

I received many teachings on texts such as Words of My Perfect Teacher, Three Visions, Lam Rim Chenmo, Bodhisattvas way of Life, Madhyamaka, Uttaratantra, and Nagarjunas Letter to a Friend, most of these more than once.

I have done many retreats longer than one month in addition to my three year retreat. These include Ngondro, Tsasum Drildrup, Red Tara (four), White Tara, Vajrapani, Vajrakilaya. I also completed the full nine month strict silent Vajrayogini retreat at Vajradhara Gonpa and more recently the shorter retreat mantra commitment whilst at the Virupa Centre.

In 2016, I came to the Virupa Centre in Canberra where I began a retreat interrupted only by the teaching programme at the IBA in Kathmandu, Nepal called the Complete Path Programme. I have now completed the first two years of this seven year study programme and require funding to continue these studies and retreat.

In November 2018, I returned to Bodh Gaya, where within minutes of arriving at the Bodhi tree I was given a set of Theravadan robes!! Dzongsar Khyentse Rinpoche arrived two days later and he said to me that I should wear these robes and to, “Go for it!” He later put some fruit in my alms bowl just as HH Dalai Lama had done at the time of my ordination.

On this basis I will now combine my studies at the IBA in Nepal with undertaking retreat in Myanmar. In this way I will obtain the training of a Theravadan monk and be able to combine this with the Guru Yoga given to me by Dzongsar Khyentse Rinpoche. That is, whilst at Bodh Gaya DKR gave a teaching and practice of Shakyamuni Buddha that allows me to unify and integrate all my practices over thirty years.

I also hope to further consolidate all these activities by taking on full ordination vows before I complete these studies and retreat.

In Dec 2018, I participated in a seminar at Wat Pa Bodh Gaya and attended by HH Dalai Lama. At the seminar HH DL as well as the current abbot, Ven Bodhianandamuni expressed their wish that both traditions work more closely together. I doubt that either teacher knew of my history and so I now intend to return to Bodh Gaya to fulfill the wishes of both teachers and be fit both traditions. The best way to do this is to pursue my aspiration to take full ordination vows under the Bodhi tree.

In January of 2020 I successfully reached my fundraising target of $1800. I hoped to use these funds to finance my planned activities of doing retreat at Pa Auk monastery in Myanmar to be followed by a trip to Nepal to attend the fourth year of the Complete Path programme being led by HH 42nd Sakya Trizin.

I believed at the time that these funds would last until the end of the year and so be able to also attend the Dzongsar and Sakya Monlams at Bodh Gaya as well as to receive the second part of the historic Collection of Sadhanas empowerments being bestowed by three Sakya Trizins at Bodh Gaya.

By March 2020, the pandemic hit and India has been in strict lockdown ever since. Fortunately, by some stroke of extreme good fortune, the day before the lockdown commenced, I made my way here to Dharamsala rather than catch the bus I had booked to Delhi.

The trips to Myanmar and Nepal were no longer possible and some of funds raised earlier are now tied up in useless air tocket travel vouchers. I considered going to Sri Lanka or Bangladesh but these options were also not possible.

The lockdown means I cannot now go to any other country and also returning to Australia is not feasible. It would cost at least $2500 in air fares and I would be required to pay another $3000 upfront in hotel quarantine fees by Aust govt. After that I would still be homeless, unemployed, and without possessions, assets, income or finances!

I cannot go to any local monastery or Dharma centre here in India because the local Govt is not allowing this during the lockdown. Nor can I travel elsewhere in India!

So I am stranded here in a guesthouse in Dharamsala for the duration of the pandemic!

Actually, being so close to HH Dalai Lama at this critical time is for me an extraordinary blessing and one I want to make full use of by doing much retreat and study while I am here.

Once the travel restrictions are lifted I intend to go to Bodh Gaya to attend the Monlams etc if they are still being held and at that time I also intend to undertake full ordination vows.

So I am very much a homeless monk relying upon the alms bowl for requisites so that my practice might continue for at least one more day.

...But for reasons I will explain progressively over many future Facebook posts, this may well turn out to be the opportunity of a lifetime!

Eaxh day on Facebook I have been writing posts detailing my journey towards receiving full ordination vows at Bodh Gaya. I recent months this journey has hit something of a roadblock in the form of this pandemic. However, I see this as a blessing and an opportunity to further develop my aspiration for ordination as well as my compassion so that I might be able to offer meaningful solutions to others who are also in lockdown or fearful at this time.