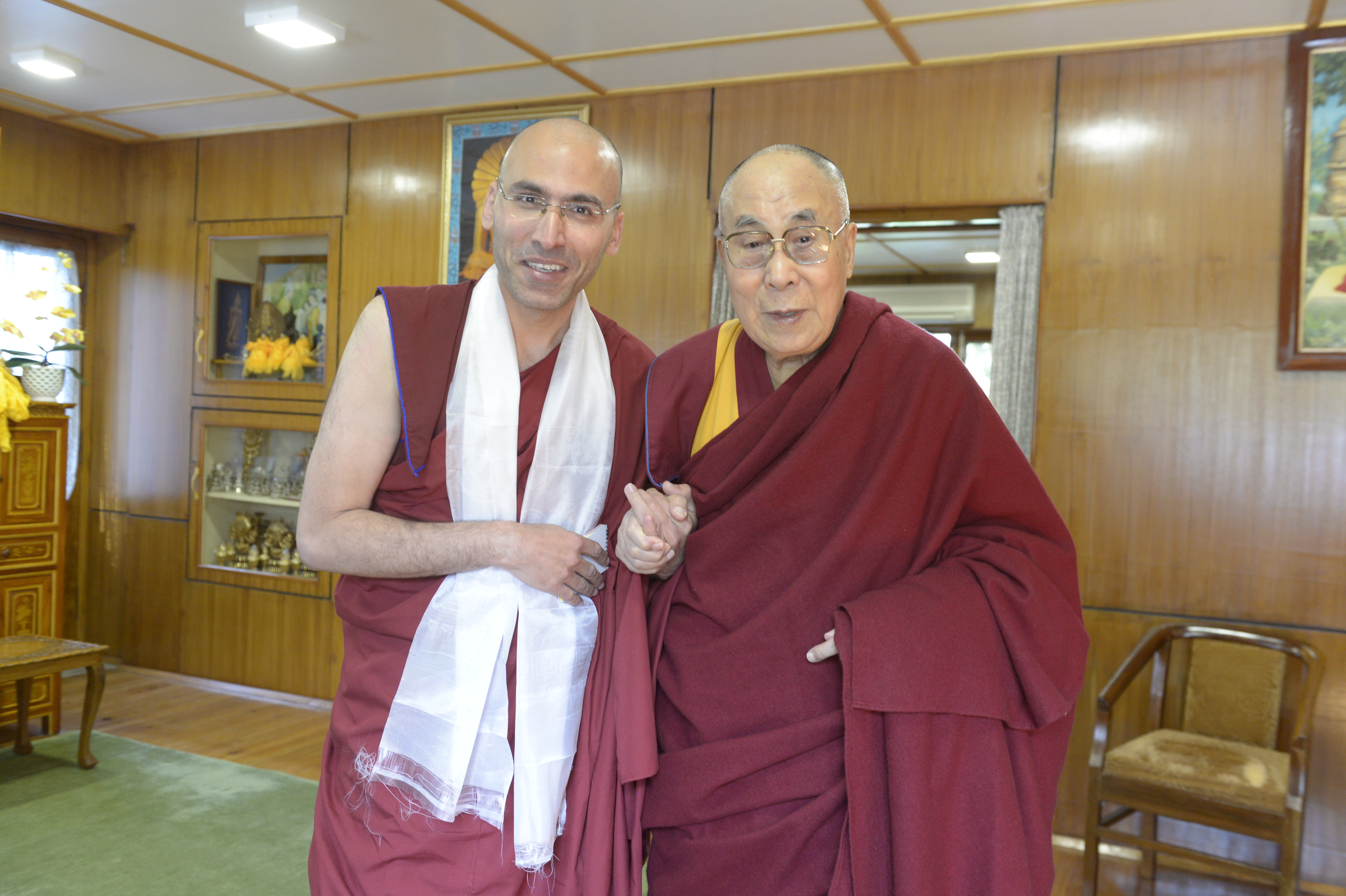 Since 2008, when I came into contact with Tibetan Buddhism namely the Drukpa Kagyu Lineage.

In December of 2010 I took refuge with my root Lama H.E. the 8th Dorzong Rinpoche.

From 2010 until the present day I have completed various short term retreats in South East Asian countries.

All these years I continuously reflected on these questions: what is the source of our own personal and worldly suffering? What does it mean to be genuinely happy? What is the highest aspiration of a human heart? Based on these reflections and study of Buddhist texts, in March 2017, I took the full monk vow (Bhikshu), in Dharamsala, India. The ceremony of ordination was conducted by His Holiness the 14th Dalai Lama. I see the path of monkhood as being a constant effort of a human being to be free, to purify all gross and subtle defilements of one’s own mind, to truly be an inspiration to others, in short becoming a mature Human Being.

When I started my graduate studies (Political Sciences, in Romania) I had in mind that one day I will be an Ambassador, serving my own country. I soon woke up from this dream, knowing that I lack the survival skills in a harsh politicized environment. Yet, the idea of being of service to others, to society at large, never left me. After graduation I started working for international NGOs that lobbied for better policies for disadvantaged people, focusing on Roma/Gypsies (my ethnic background). For some years, these jobs gave me a sense of ‘being right’ in what I was doing. However, during the work I had to face two main challenges. One was this feeling of being overwhelmed by the enormity of the task, feeling at times utterly useless in bringing any solution for those I was supposed to represent. No matter how many programs, policies, and resources were poured, the suffering of people never ended. The other challenge I was confronted was my own defilements and the inability to bring any solace to those around me. I asked myself how can I help others when I myself am sick, full of destructive emotions and blind attachments?

Based on these reflections, in 2008 I decided to quit my job and since then I've been involved in many Dharma activities and retreats.

In July 2018, a 3-year retreat in the Drikung Kagyu lineage of Tibetan Buddhism will be conducted in Germany (www.milareparetreat.org/index.php/en/2012-07-19-17-39-29). Due to the high cost of retreat facilities in Europe, every retreatant including the monastics is expected to cover their expenses. Out of the total cost, the centre grants a scholarship covering approximately half of the expenses for fully ordained monastics.

Why do I want to participate in this retreat?

The answer to this is very simple – I want to be free from all the emotional obscurations and other dark obstacles that block my ability to fully benefit other beings. The retreat is a space for going deep into the mind and exploring all the aspects of one’s personality and facing them with a brave heart. If this is not the path of the warriors, then what is?

I have chosen to join the retreat in Germany, first of all because I know the retreat masters quite well. The retreat masters guided me along the path and a bond of trust was developed. Also, what is unique to this retreat is that is run by Westerners for Westerners. Over the years it became obvious though the Tibetan master are the most qualified, is very difficult for them to relate to modern age issues faced by Western students. During this retreat a holistic approach, integrating the modern psychological tools, the wisdom of Eastern spiritual traditions, body awareness exercises, and so forth are all are included which creates a space of understanding, care, and most of all sharing the same cultural background.

1. During the retreat I can recite specific prayers at request of the sponsors.
2. Everything in the retreat will be done with the pure intention to benefit others.