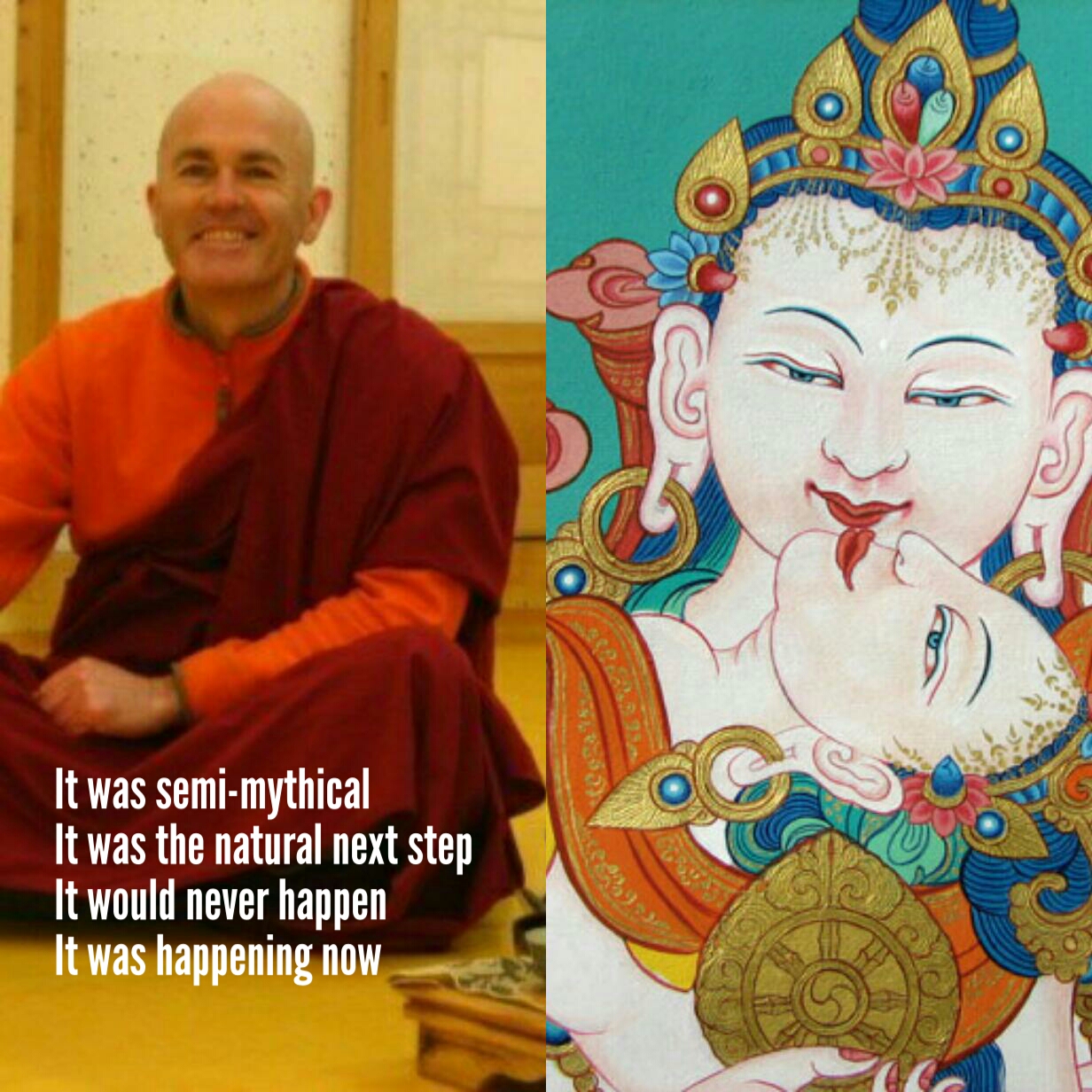 This is a traditional Tibetan three year retreat in the Kagyu tradition.

My name is Tenzin Shenyen, a Buddhist monk from England.

One morning back in the 1980s, shortly after I first began practicing buddhism, I woke up with the following short poem fully formed in my mind: “The young Tibetan monk comes West / He will walk through the whole of Western civilisation / as if it were snow.” I was working in an art gallery and living in an abandoned building. And deep down inside, without understanding what I meant by the phrase, I kept telling myself I was going to be a ‘21st century monk’. When the 21st century began I realised I had done the hard part - I had made it into the 21st century! - and the wish to ordain suddenly intensified. In 2004 I received my ordination from the Dalai Lama in Dharamsala, India. The process of being that 21st century monk was underway.

I came to understand that I wanted to respect both aspects of my situation - to engage with a 2,500 year-old tradition on its own terms, without unconsciously destroying its hidden inner harmonies in the name of an arrogant Western philosophical rationalism, but also to stay true to the culture that I am from, true to its languages and psychologies and aesthetics. I think it is superstitious (and impossible) to simply try and turn myself into some cardboard cut-out ‘Tibetan’ clone, and equally superstitious to believe we can ‘cleanse’ an ancient spiritual culture of anything we find illogical, uncomfortable, incomprehensible or old-fashioned before agreeing to practice it.

During my years as a Buddhist monk I have explored not just the Tibetan forms but have also spent time in Theravadan monasteries east and west, and in Japanese and Korean zen monasteries. My ‘buddhist universe’ contains not just Nagarjuna, Shantideva, Milarepa, Je Tsongkapa, Dogen Zenji and others, but also Heidegger, Wim Wenders, Chris Marker, Helene Cixous, William Gibson, Cy Twombly, Bach, and Ibn Arabi, to name just a few. I’m interested in sanskrit texts and contemporary art, shamatha and cinema, deity practice and robotics. “A bodhisattva should study everything,” says Shantideva. I have done so, and it’s been a great joy. And I’ve done it living as a homeless monk for most of these years - spending the winter months indoors, in monasteries or house sitting for people, and in the summer months wandering about in the south of England, living in forests in my tent and supporting myself on alms round. In 2008 I slept in 93 different places.

Now I would like to make the natural next step: to settle in one place, to become ceremonial but relaxed, open-minded yet totally dedicated, and perform one of the sweetest spiritual exercises available in any religious culture anywhere: three years of deep retreat covering the entire Tibetan approach to enlightenment. To go beyond merely ‘believing’ in buddhism and to whole-heartedly imagine it instead. To take on board the architectures of subtle body, prayer, purification, solitude, communion with The Invisibles, repetition, study, miracle, and dream, and for three years to treat them as if they were absolutely true.

Unfortunately, i don’t have all the conditions to make it happen. I have the inner stability, the willingness and the faith to step into the deep unknown for three years - but i don’t have the finances to do so. Of course, the kind of person who is willing to do a three year retreat is generally not the kind of person who has 26,000 dollars at their disposal! But equally, there are many people out there who deeply believe in the goodness of such a retreat but who don’t personally have the freedom and confidence to undertake one, yet would love to support such an endeavour. So the natural next step is to try and bring these two groups together. In the name of something that goes beyond the limits of our imagination and rationale, and which treats as one the practitioner and the supporter in its karmic resonance, let’s see if we can make it happen.

To support the cost of doing a traditional 3 year retreat in the West, where the energy of such practices dearly needs to be properly established and grow.

To the extent I am able to do so, I would like to share the whole process of approaching and completing such a retreat with people everywhere. ( https://radioshenyen.blogspot.co.uk )
And afterwards, without setting myself up as a teacher or anything like that, to simply be ready to share the experience in a way that helps others to move in similar directions. I have in fact been in many teaching situations in my years as a monk, it is something I love to be involved in and am very open about what post-retreat may offer, but it is very important not to enter into 3 year retreat as some kind of career step. I will be there, in 2021, ready for anything.