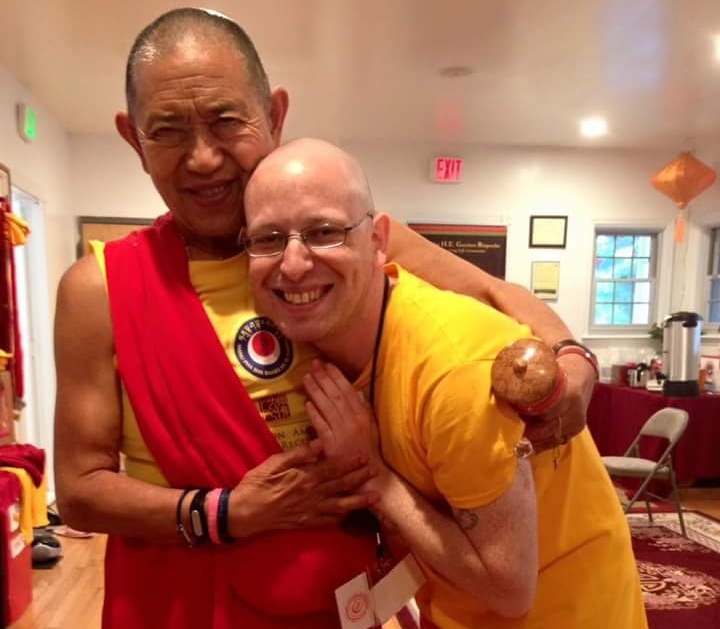 I'm here seeking sponsorship so that I can attend a rare empowerment in mid-July that I need in order to practice my yidam deity. Not to leave all of the work to my donors, I will be looking to sell some personal items and do some odd jobs to raise money as well.

For those unfamiliar with Tantric/Tibetan Buddhism, "empowerments" are initiations that enable you to visualize yourself in the form of the deity, recite the mantra which is the deity's speech, and meditate so that your mind and the deity's mind merge inseparably. Receiving this is an essential prerequisite for doing any tantric practice.

For several years now my main practice has been the "outer" or "common" ngöndro which is the contemplation of the Four Thoughts that turn the mind towards Dharma and away from Samsara. I've also been committed to practicing Vajrasattva and accumulating his short mantra since 2016. My heart is the Chöd Lüjin (specifically in its Kusali form), which I have permission from Lho Ontul Rinpoche to do as a life practice.

I've been traversing the path for 10+ years now, slowly and oftentimes stumbling towards liberation. Most of that time was spent on study (i.e. listening to teachings and reading texts) rather than habituating my mind. It took me a while to figure out that my root gurus were Garchen Rinpoche and Gyalpo Rinpoche, and to finally be able to see my path of practice. Now that I have this clarity of vision and focus I would like to transition from intellectual understanding to experiential understanding, to dig deep and eventually come to know the Dharma of realization.

My main aspirations in this life are to become 1) a better father and living example of the Dharma to my daughter, 2) an interfaith Buddhist chaplain who brings love, compassion, and wisdom to bear when engaging with others, and 3) a Tibetan-to-English translator who helps bring the message of the Buddha and many great masters to those who could not otherwise access the precious treasury of the Vajrayana tradition.

Thus far I'd say that I've made the most headway on goal #3. I attended a couple intensive Tibetan language courses in Nepal and have done a bit of self-study in the years since. I was fortunate enough to work on a short lineage prayer on the Hevajra tradition of Marpa which will be calligraphed and offered to Drikung Kyabgön Chetsang Rinpoche soon, and I also edited the phonetic transliteration of the Dalai Lama's long-life prayer for Garchen Rinpoche.

I'm currently volunteering as a transcriber/editor for the Garchen Dharma Institute in Taiwan, and will be writing the biography of the 1st Karma Chagme Rinpoche for the website Treasury of Lives in the near future.

I am here seeking sponsorship so that I can attend an upcoming empowerment within the Yangzab terma cycle held in the Drikung Kagyu lineage.

Back in 2016, during the 80th Birthday Jubilee of Garchen Rinpoche in D.C., I had the great fortune of being appointed the honorary attendant of Lamchen Gyalpo Rinpoche. This gave me intimate and unprecedented access to a great master as we went on his daily walks.
I took the opportunity to ask Rinpoche some key questions relating to my practice, and in his kindness he answered them all. He told me who my personal meditation deity from past lives was without hesitation. However, when I tried to jointly sponsor Lamchen Gyalpo giving the empowerment for that deity, things eventually fell through due to his failing health.

Gyalpo Rinpoche's passing last October was a great loss for all Vajrayana. It was also a great reminder of impermanence and why none of us should wait to pursue that which brings benefit to ourselves and others. The timing of my seeking this wang again now seems to be auspicious, as the only other lama known to give the initiation once every few years will be offering it in only a month or so.

To put it simply, I would like to honor the path that my late guru set me upon and do not wish to wait any longer.

With a love of language and a penchant for creative writing, I have composed a few prayers from the heart over the years. I would love to share this Dharma poetry with anyone interested, and especially those who become my kind sponsors.

Among these works is an extensive long-life prayer for Garchen Rinpoche that I was able to offer him during his birthday celebration in 2016. Rinpoche himself gave permission for others to recite it during their practice after it was requested by several sangha members. I am working on translating the prayer into Tibetan so that it can be chanted, and a Vietnamese version is also in the works.

I would of course also dedicate all roots of virtue accumulated through my yidam practice to all those donors who helped make that possible.