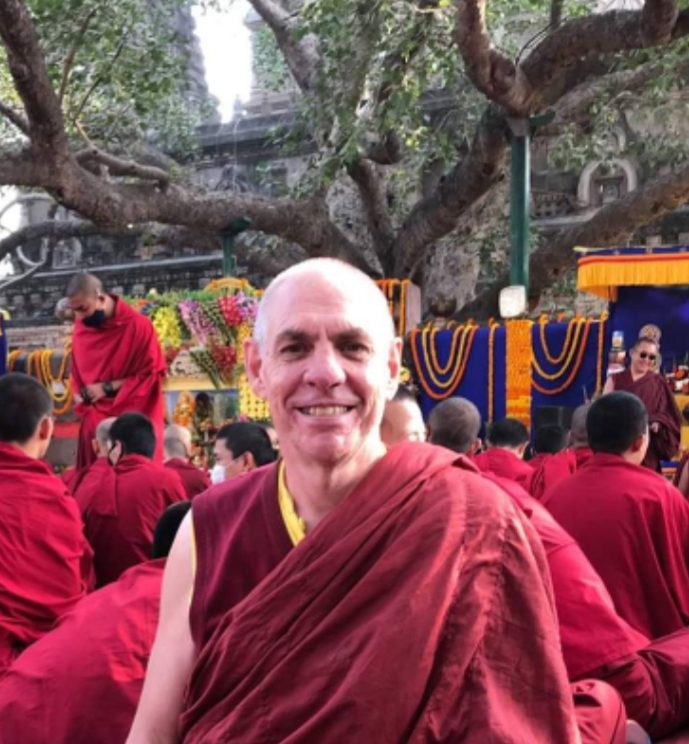 I have been a Buddhist monk since 2001 but have been practicing since 1986. I am currently in Bodh Gaya doing Ngondro practices and have recently attended the first year of the auspicious Collection of Sadhanas empowerments to be given by three Sakya Trizins.
I also have finished the third year of teachings at the IBA in Kathmandu in the seven year Complete Path Programme (2017- 2023), which is conducted by HH 42nd Sakya Trizin.
My plan has been since January 2017 to use the interim periods between annual teachings at IBA to the best advantage by practicing in retreat as best I can. I completed two separate retreats of six months at the Virupa Centre in Canberra, Australia in 2017 and 2018 (Jan- July). This year I travelled to Myanmar where I did retreats of 8 weeks at Wat Pa Auk (calm abiding) and seven weeks at the Mahasi centre in Yangon (Vipassana).
I have created a Facebook page which explains my progress toward taking full monastic ordination vows under the Bodhi tree at Bodh Gaya.
I have no income, no assets and I am not supported by any monastery. Whilst I rely upon offerings made to my alms bowl, I cannot say that I uphold the practice of the alms bowl strictly as occurs within countries such as Myanmar. By making this petition I am signaling my willingness to learn this practice as well as make known through Facebook and other means the difficulties of upholding such practices in countries such as Australia.

The first Buddhist teacher I met was Dzongsar Khyentse Rinpoche (DKR) in 1986, after which I immediately went to live at Wat Buddha Dhamma Forest Monastery and studied intensively for five years in the Theravadan tradition with Phra Khantipalo.
In 1991, I met up again with DKR and lived in Sydney. There I practiced with the Gelugpa tradition at the local FPMT centre, the Kagyu tradition with Lama Trijam and became mostly involved with the Sakya tradition with Gyalsay Tulku Rinpoche. I also studied and practiced the teachings with Chagdud Tulku Rinpoche, Namkhai Norbu Rinpoche and Jigme Tulku Rinpoche.
When HH 41st Sakya Trizin visited Australia in 1997 (along with the current HH 42nd Sakya Trizin, Ratna Vajra Rinpoche and future 43rd Sakya Trizin) I had found my root guru(s). A meditation hut became available at the retreat centre of DKR called Vajradhara Gonpa. So I began what I believe was the first three year retreat conducted in Australia.
At the conclusion of the retreat I was advised by DKR to ordain as a Theravadan monk “for ten days”. I did this at Bodh Gaya with the assistance of the abbot and monks of Wat Pa Bodh Gaya in Jan 2001.
This was enough to convince me to ordain as a monk in a Tibetan tradition. So six weeks later I ordained again as a novice monk, this time with HH Dalai Lama at Dharamsala receiving the name Tenzin Lektsok.
HH Sakya Trizin advised me soon after this to return to Australia to help support the Sakya community in Sydney, which I did between 2002 and 2016. In that time I assisted Khenpo Damchoe and later Dungyud Tulku Rinpoche.
I have received many empowerments such as Kalachakra (4 times) Hevajra/Lam Dre (5 times), Vajrayogini ten day teaching (4 times), Complete cycle of Red Tara teachings of Apong Terton and all the principal Sakya empowerments.
I received many teachings on texts such as Words of My Perfect Teacher, Three Visions, Lam Rim Chenmo, Bodhisattvas way of Life, Madhyamaka, Uttaratantra, and Nagarjuna’s Letter to a Friend, The Sages Intent, most of these more than once.
I have done many retreats longer than one month in addition to my three year retreat. These include Tsasum Drildrup, Red Tara (four), White Tara, Vajrapani, Vajrakilaya. I also completed the full nine month strict silent Vajrayogini retreat at Vajradhara Gonpa. Whilst at the Virupa Centre in 2016 & 2017 I completed the Ngondro for the third time as well as the shorter mantra commitment for the Vajrayogini practice. Early this year I conducted retreats at Pa Auk monastery and the Mahasi centre in Yangon, Myanmar.
Last November I came to Bodh Gaya and soon learnt that it was not possible to return to Australia to continue my practices at the Virupa Centre. Prior to enrolling in the seven year programme at the IBA in Kathmandu, Nepal called the Complete Path Teachings, I made the commitment to stay in retreat for as much as I could in the interim periods between teachings at IBA. So I put together this programme where I spend three months in Nepal at IBA (July – Sept), five months in Myanmar (Feb- July) and the remaining time at Bodh Gaya.
So I have now completed three years of this seven year programme which only becomes more interesting and involved as it continues to develop.
In November 2018, I returned to Bodh Gaya, where within minutes of arriving at the Bodhi tree I was given a set of Theravadan robes!! Dzongsar Khyentse Rinpoche arrived two days later and he said to me that I should wear these robes and to, “Go for it!” He later put some fruit in my alms bowl just as HH Dalai Lama had done at the time of my ordination in 2001.
This gave me the confidence to develop the programme described above alternating my time between Nepal, India and Myanmar. This will greatly help me develop as a practitioner of non-sectarianism as well as develop as a monk.
In October 2019 I came to Bodh Gaya where I was able to participate in a ten day Drubchen and other prayers at Shechen Monastery dedicated to Sogyal Rinpoche. In late November the new Sakya Monastery at Bodh Gaya was opened just prior to the commencement of the Sakya Monlam. ALL three Sakya Trizins will participate in bestowing the Collection of Sadhanas empowerments.
Later in 2020 I will be in Bodh Gaya again to receive the second year of Collection of Sadhana series of empowerments given by the 41st, 42nd and 43rd Sakya Trizins over 45 days.
I do not know of any time in the 900 year history of the Sakya tradition that three Sakya Trizins of the past present and future have come together in this way! Certainly it has not also happened at Bodh Gaya. I am in the fortunate position to be able to combine these empowerments with my studies at the IBA.
In early January 2020 I had an audience with HH Dalai Lama where I said to him personally that I wanted to take full ordination.
Whilst here in Bodh Gaya I have attended teachings by HH Dalai Lama and participated in many of the Monlam prayer festivals of the Sakya, Nyingma and Kagyu traditions as I can.

I am enrolled in the seven year Complete Path programme at the International Buddhist Academy in Kathmandu, Nepal led by HH 42nd Sakya Trizin. The fourth year of that programme will occur between July and October after which I hope to return to Bodh Gaya for the Dzongssr Monlam, Sakya Monlam and the Collection of Sadhanas empowerments which are being offered by all three Sakya Trizins. Before that I wish to combine these teachings with a four month meditation retreat at Pa Auk monastery in Myanmar (April to July) I am currently in Bodh Gaya at present (mid January) where I asked HH Dalai Lama personally to receive full ordination vows. I expect this to occur later this year or next year. In early March I will travel to Bir HP where HH Sakya Trizin is giving empowerments for four weeks at the request of Dungyud Tulku Rinpoche who I have been closely associated with since 1997
In short this petition will fund a comprehensive training suitable for a fully ordained monk.
I also hope that through making this petition I can work with organizations such as theofferingbowl and the Khyentse Foundation to build better funding models to support a monastic sangha.

The real benefit from supporting these activities will only come after I complete the seven year training programme and receive full ordination. At present there are fewer than five fully ordained western monks in the Sakya tradition and even fewer who have committed themselves to the pure practice of Dharma in extended solitary retreats.
I feel that for the next few years I should be permitted the opportunity to continue these activities and bring them to their conclusion.
Until that time I must focus on my studies while all the time reflecting upon how my teachers would want me to make my efforts beneficial to others. At the appropriate time my teachers will offer advice as to how best to bring maximum benefit to others.

I am also using my Facebook page to build up a network of interested followers. I only write posts while I am here in Bodh Gaya and only in relation to my progress toward receiving full ordination. I believe that I am providing a compelling narrative.
In the event that I achieve this target any excess funds will be donated to the Khyentse Foundation.
All potential donors can contact me at tenzinphil@gmail.com for additional information and/or discussion of their own Dharma practice.
I welcome anyone to follow me on my Facebook page under the name Philippe Droulers. Whether you wish to donate or not I am happy to make a new friend.